What’s Wrong with My Scene? Part 2

…in which I continue to repackage Alison Goodman’s scene diagnosis workshop. I attended this workshop a couple of weeks back with a half dozen other writers of varying experience. Alison’s purpose was to help us assess, tweak and fix our scenes for maximum scenely goodness. Let’s get right into the good stuff…

Another piece of helpful advice was around character point-of-view (ie., the character through whom we readers are experiencing the scene).

Actually the question “Who will experience the most conflict in the scene?” might be even better. Imagine the pov character is observing two strangers brawling in a bar — not much action for the character, but she is in conflict because the fight might make her scared for one of the strangers, or it might surface memories of physical abuse, or make her despair about human nature (a theme in your story).

Once you’ve established whose scene it is, look at the beginning of the scene. What kind of energy is there (or “value” as Alison called it). Is it positive or negative? Is the character feeling vindicated after an earlier scene, glowing in the warmth of yesterday’s kiss, sad and angry that a friend just got killed by the giant robot? Then look at the end of scene: what’s the energy/value there?

This made me think about those scenes (I know they’re out there – just can’t recall one) where the surface tone of a scene is happy happy happy, but the background tone is tense – where, for example, something is happening in the background or bigger picture which lets us viewers/readers know that the character’s living in a bubble and the bubble is about to burst. Though the value of the scene for the character himself is neutral, for the reader the tension is building. This might be a scene where a girl races to her iPad to check her emails, excited about her love interest’s declaration of love just yesterday, finds the love email there, reads it in a warm fuzzy bubble, sighs and writes her reply … All happy right? For her in that moment, sure. But we the readers just read the scene prior where Bobby her new love finished typing out his email to her, then hit send just in time to avoid his wife seeing it as she walks into his den. The tension in the next scene would mount as we feel sorrier and sorrier for our love-stricken girl. (By the way, that scene would work the other way around gender-wise too).

On the subject of characters (the people who populate scenes), our tutor also suggested reviewing the minor characters or “extras” in a scene carefully. Do they need to be there? Do they add to or detract from the energy and focus of the scene. In my novel Last Among Equals (currently under submission), I had a character Anselm who appeared later in the story. In draft three (when I was trying to chop 15,000 words from the manuscript), I realised I didn’t need Anselm. He wasn’t necessary to the plot, and his entire reason for being there seemed to be to carry a crossbow which he shot once before he got killed. Combing through all the scenes that he appeared in, I delegated all of his dialogue and action to other characters (and cut a lot of it out completely because it just wasn’t essential) before erasing Anselm from the story entirely. From memory, this not only made the story simpler and tighter, it cut almost 2000 words from the manuscript (and enhanced the roles of other minor players). 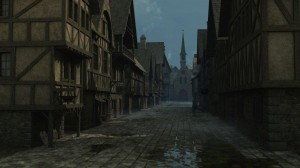 So putting this all together, I took a look at a scene from my current novel project. In the scene, the character Maria starts off nervous as she threads her way toward a rendevouz through her medieval town at midnight. She finishes the scene angry and despairing. So that sounds a negative-negative shift in value, or a neutral one. But I’m happy with the scene for three reasons:

I hope for you writers out there that this has been helpful. Even in non-fiction and in articles, you can use these ideas to create an emotional tone and arc for your reader; I’d be interested in your ideas and feedback on that.

By the way, Alison’s site and books can be found here. Well worth the look!