This post is the first in a new series where I invite an author whose work I’ve enjoyed to respond to five questions & one statement. It’s meant to be short, sharp and interesting. So, I’ll get on with it!

Our first guest is horror and fantasy writer Keith C Blackmore. This year I “discovered” his Mountain Man (MM) series of zombie novels, a series I’m loving (I’m currently immersed in the second book). Keith is an indie author and a stand-up guy. Let’s see how he handles my questions… 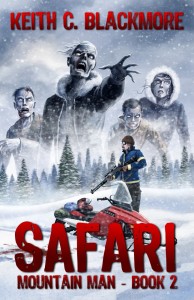 PETE: Where did the inspiration for the Mountain Man series come from?

KEITH: Always wanted to do a zombie story (as well as some other classic monsters) so I sat and thought about what I liked about the genre and didn’t like, and kept those notes handy. I had read Stephen Knight’s book “The Gathering Dead” which was my first exposure to military vs. zombies, and while it was a great read, I knew I couldn’t do something like that.  So I created Gus, who is essentially Robinson Crusoe at heart, but with a little more emotional baggage. I didn’t want to do an “outbreak” book. That really didn’t interest me, but I did like the concept of this average guy surviving with no special training, using only common sense and taking no chances (at least in the beginning, anyway). MM was always a character piece right from the start, with the zombies as the backdrop, but with attempts to make it scary, or at least suspenseful.

PETE: It’s a wonderful character piece: Gus is a very likeable (if flawed) character! So, what are you most proud of in your various novels?

KEITH: Difficult question to answer as I can’t say I’m really proud of the books. I am extremely happy that people buy,  read and enjoy them. And I guess I do feel vindicated that my work is selling after 20 plus years of trying to get a publishing contract.  I’m glad people like the characters. At one time I felt that my characterization skills were lacking, so I really tried to work on them, making mental notes of such great writers as David Gemmell and Stephen King. And MM got a movie option agreement/contract just a few months ago and even though I know it’s a long shot of it even becoming a flick (something like 5%, if that?), it’s a professional pat on the back that I’m doing something right.

PETE: Absolutely! Hope they make the fillum. Next: whose advice do you listen to on choosing the books you read? (Goodreads, friends, professional reviewers, Amazon reviewers…?)

KEITH: On choosing the books that I read? I usually do my shopping on Amazon nowadays (it’s so convenient) but if I’m around a used book shop I’ll go in there too. I read the product blurb and the first few pages to see if the writing style clicks with me. The storyline has to be really, really interesting for me to purchase without sampling. I don’t usually follow any advice (or if I do, it’s from friends). I read a lot 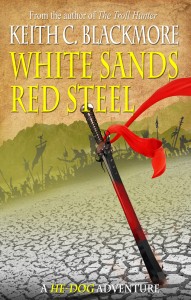 of different genres, and make a study session of the ones that really impress me.

PETE: What has been the hardest or most wearisome part of getting your writing off the ground?

KEITH: The hardest part? Definitely the editing . After going over a book two or three or more times, just looking at the cover makes me want to barf. It’s like eating your favourite food for a solid week. The writing of the first draft is usually great, and going back for that second draft a few months later is also great, but after that, it gets really tedious.

PETE: What’s next for you?

KEITH: I write in Horror and Heroic Fantasy. 2013 was set to focus on developing a new fantasy series called “131 Days.” I like the grim worlds of say George Martin and Joe Abercrombie, and my work mirrors theirs, so I’ll be writing a couple of fantasy books as well as others. I actually just finished up on the first draft of book 3 of “131 Days,” and I have a sequel to the “White Sands, Red Steel” book. “131 Days” is more of a character study while White Sands is more action oriented. There’s a werewolf book in my head that I’ll start on September 7th, and there’s the fourth book of MM. Always had an idea for MM4, but I couldn’t go back to zombies after MM3 as I needed to take a break from them. Been taking notes all the while, and I think I’m ready to go back to that world. For a bit anyway.

So production-wise, the schedule looks like this: (all are first drafts and second drafts will happen in between projects) 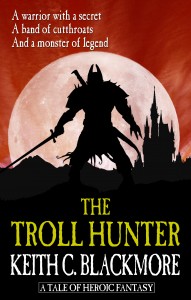 And that should take me up to the middle of 2014, I think. Only hope they sell and that people like them! One of the things being a full time writer is the unknown of it all. I’m still building my reader base, and I’m very well aware that one “bad” book could cripple whatever progress I’ve made thus far. And if the writing career falters, well, (shrugs) I’m not sure what I’ll do, which is all good motivation to produce quality reads.

PETE: Here’s your statement (respond as you wish): Self-publishing beats traditional publishing in this day and age.

KEITH: In my experience it certainly does :). But then it’s a different road for each writer. If a person can’t afford to take on the costs associated with self-publishing (cover, editing, etc) then the traditional route is probably preferable.

Keith’s work is available on Kobo and on Amazon. Be sure to check it out!