It has been my pleasure to work with Chuck Regan – Artist on the cover art for Black Marks. If you like that cover, thank Chuck! In the process or working with him, I also discovered he is Chuck Regan – Author. At the time of writing, I am 80% through his book Chimera Shakes and have read the first two chapters of Leviathan. I own both books. Great novels. Great writing. Let’s ask Chuck some questions, shall we?

PETE: Why book covers? What drew you into this line of work?

CHUCK: I have 20 years experience designing for advertising agencies, and after a string of layoffs (advertising is very volatile industry), I wanted to try something new where I had more direct influence over the end result of my efforts. Prior to advertising, I had spent an embarrassing amount of time and energy trying to break into the comic book industry as a writer/artist. By 2008, and the economic downturn, I was focusing more on writing stories without pictures, so designing book covers for that stuff I was writing seemed like a natural extension.

Some guys I met through Shotgun Honey teamed up and we started self-publishing anthologies of stories—zombies, sci-fi, noir, westerns—and all those books needed covers, so that’s where I started with Zelmer Pulp.

PETE: What things should an author do to make it easier for an artist to collaborate with them?

CHUCK: One issue I sometimes get are clients who already have a cast-in-iron idea of what they want on their cover—multiple characters and complex scenes. I tell them you gotta think like a billboard—catch the eye in a half-second. Less is more.

And a little about pricing here. I’m an indie publisher myself, and my budgets are nonexistent (I’m just lucky I already have an in-house illustrator on call), so I understand the sticker shock when I quote a price. I’ve had to turn down quite a few projects that would have been a lot of fun to work on, but when I quoted $500 for a highly detailed scene which would have required a lot of back-and-forth with the client, designing the character, costume, and background, one client countered my offer with ‘I can only pay you a hundred bucks.’ A lot of times, I’ll take a low bid just to illustrate something cool and add to my portfolio, but a project usually takes 12 to 20 hours or more to complete. I can’t think in terms of hourly rates, but a hundred dollars is ridiculous.

So I guess my answer to this question is: clients on a budget should consider giving the artist some room to have fun and explore options. The more excited and involved the artist is with the project, the more energy goes into their expression, and that, ideally, will translate quickly to the audience scanning a real or virtual bookshelf. You want your designer to love doing what they are doing for you, and if you can’t enthuse them with money, let them do what they do best. They’ll love you for it, and it will come out in their design. Ideally, it will work out that way. There are a lot of crappy designers out there. Ask your friends what their opinion is of the designer’s portfolio first.

PETE: Awesome advice. So, you have your own line of novels. I’m most of the way through Chimera Shakes and loving it. What is the inspiration for the novel?

CHUCK: It’s great to hear you like that story! I had two editors at a Bizarro publisher reject it for being ‘too insane’. Too insane for Bizarro?? Cool. I’ll take that as a compliment. A positive reaction from another author is the best compliment I can hope for, though.

Once the guys started dropping out of Zelmer Pulp, I still had stories I wanted to tell—short stories and longer projects, which usually started as ideas kicked around in our Facebook message thread, or through other publishers’ calls for entries—so I started my own imprint, ‘Rayguns and Mayhem’ to put out my own stuff. It’s purely a vanity press, and I wholly embrace that. 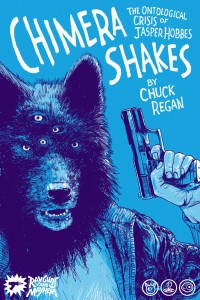 Yeah, so inspiration. I had just finished reading ‘Zombie’ by Joyce Carol Oates, which is a First Person POV unreliable narration about a serial killer who is trying to create zombie sex slaves by lobotomizing them. It’s one of those stories that sticks in your head like a tumor. It needed to be purged.

The first scene I wrote for Chimera Shakes was of the assassin in the rafters of the rock concert, which was inspired by a fun rockabilly song by Deadbolt, called ‘Tijuana Hit Squad’. I ran with that song as a short story prompt, adding in some elements from ‘Zombie’, making the hit man schizophrenic and an unreliable narrator. The novella grew out of that.

PETE: What kind of research did you have to use in order to get inside the main character Jasper’s head (so well)?

CHUCK: Um… yeah. Well, I researched the psyche profile of people with schizophrenia and schizotypal personalities to get the details as accurate as I could. I also read a few memoirs of what it was like to live with the disease. It’s always fascinated me, but to be honest, I would probably chart well within the spectrum of the disorder. It helps to be a little crazy to write crazy.

Seriously though, my wife is a student of psychology, and she’s given me some concerned looks over the years, but particularly after I read this story aloud to her. I grew up in a religious cult, so the paranoia induced by trying to discern what is a message from supernatural forces or just a random events derives from that cult experience. All of this I poured into Jasper Hobbes.

PETE: Well, I’m tellin’ ya, it works. And as someone who works with people with mental illness, I also found it empathetic to someone with such a condition. Last question: How do you manage your time to fit it all in, day job, writing, designing?

CHUCK: For the last couple of years, I’ve been working part time from home doing freelance graphic design and illustration, so I set my own schedule. I made it a ritual to spend a couple of hours in the morning writing each day, when it’s still quiet. My prose-related synapses start to stretch thin after 3 or 4 hours, so then I move on to the illustration and design part of my day. My days vacillate between those efforts, depending on what projects are due.

My wife has been very understanding as I pursued this change of career, but it doesn’t compare to the money I was making working as an art director in advertising. I haven’t been able to bring in quite enough money to sustain us, so I’m back to looking for a real day job again. I’ll still make time for writing and covers, because there’s still a lot of crazy that still needs to come out.

Chuck is what they call a “stand-up guy”. I’ve enjoyed working with him on Black Marks and I’m enjoying reading his work. If you’re a writer looking for an artist, talk to Chuck. If you’re looking for fresh spec fiction, look at Chuck’s.

More of the same?