A talented writer and generous host of the Ward Room website, James Jackson is the energetic force behind a new zombie apocalypse series. He also serves as an outdoor survival instructor, and a Military Technical Advisor for several published authors. I enjoyed the first in his series and I thought I’d introduce him to you all by way of pitching five questions and a statement his way (my words are those in itallics) …

1.  James, I notice a wealth of military knowledge in your writing. From whence does this wealth flow? I spent almost 20 years in the US Navy. During that time, strangely for a waterborne service, most of it was spent on land, shore duty. It was during that time I interacted with other US military units and several foreign nations’ military units. I’d like to think that experience serves my writing and that knowledge flows from there.

2.  Can you tell us something of your creative process: what happens between the genesis of ideas and completed, polished projects? The ‘genesis of ideas’ is quite a statement. I don’t know how other authors get that ‘spark’ or ‘genesis’ moment, but for me it happens at the most strangest  of times. I’ll be outside doing some project or sleeping and it hits me out of the blue.  I keep notepads with me all the time so I don’t lose the idea. I’ve caught myself watching television and zoning out with some idea that who knows where it came from, but, damn. It’s good. I’m probably sitting on several years’ worth of books, not just the genre that my current project is, of material that fills notepads and notebooks. To get to a completed, polished project? That can take a while with my schedule, but its well worth the wait.

3.  The Up from the Depths series: what’s it about and what’s the inspiration for it? Up From the Depths is about a global apocalypse that contains zombie-like crazy people. Yeah, there’s a lot that going around. Think 28 Days later, George Romero, Tom Clancy, and Michael Crichton then puke that up onto the floor and you’ve got a rough idea of what Up From the Depths is about. What makes it stand out, at least in my mind, is the accurate level of detail when it comes to the actions and reactions of the military characters within the story.  The inspiration for the series came from several sources. The classic Dawn of the Dead by George Romero played a role as did the remake of that same film in 2004. If you’ve seen the remake, there’s a montage shortly after the female lead escapes her house. That montage  plus being exposed to some truly awful books about a zombie apocalypse can be credited as the slap in the face for me to wake up and start writing Up From the Depths. 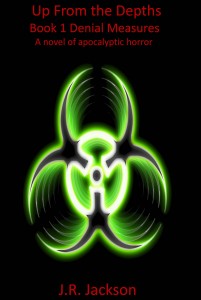 4.  What would you say is a point of difference setting your series apart from other zombie series? That would be the level of detail and accuracy in weapons use and military procedures. That and I really strove to keep all the known clichés and stereotypes out of the series as much as possible. Not saying there aren’t any, but there aren’t as many. Does that make any sense?

It does make sense. I love the fact that this virus is unleashed maliciously. There is a conspiracy theory out there about the rich taking action in reducing the population of the planet’s poor to give them a bigger playground for themselves, so this played nicely on that.

Respond to this Statement: “It’s impossible to make a living as a writer in this day and age.”

Not sure how to respond to that statement. It would have to depend on what kind of lifestyle you currently have and what you plan to achieve. It’s possible to make a living but not right away. Don’t publish your first novel and quit your job the same day. If you’re dedicated to something and have a realistic goal, there’s no reason why you can’t reach it. Make a plan, work the plan. So, no, it’s not impossible to make a living as a writer in this day and age, you just need to work at it.

The book is available here: https://www.smashwords.com/books/view/578399 and also at Amazon.

The blurb lies below…

Where will you be when the world ends?

What will you do to save the lives of people you love?

Follow the men of ODA-141, the Outlaws and the SEALs of Shark Platoon in this hard-hitting, real-world look at life before, during, and after an apocalyptic event.

In a world ravaged by a mutated virus survival is all that matters.

This epic novel of apocalyptic survival and terror begins as a sociopathic billionaire decides that mankind is the disease, and unleashes a virus to cleanse the earth. What he didn’t plan on was the side effects. The unbelievable scope of this classic tale encompasses monumental sequences of realistic, spine-chilling horror in a world inhabited by infected hordes of crazed flesh devouring zombies.

This is the way the world ended.