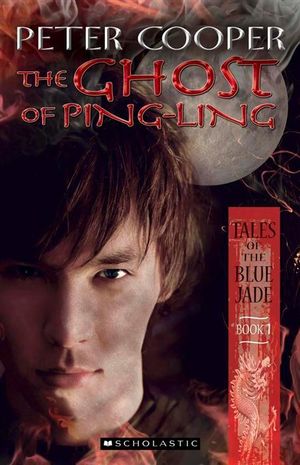 I’m partway through an amazing book by Australian author, Peter Cooper. Five chapters into The Ghost of Ping-Ling I find myself hooked on this riveting adventure set in a rich fantasy world. I thought I’d catch up with Peter and see what makes him tick and how this wonderful novel came about…

What did you mostly read, growing up?

I wasn’t a “wide” reader when I was growing up. My main staples were Tolkien and the Willard Price adventure series. I also read and enjoyed Nicholas Fisk’s Startstormers series and the Mad Scientist Adventure Club books, both of which are not very widely known today but were/are brilliant books.

What single book (or series of books) had the “profoundest” effect on you?

Definitely the Hobbit. It was the first fantasy I ever read and it changed my life forever. Up to that point I don’t remember another book so totally drawing me into its world. It was also the first book to give me a love for fantasy maps. I can remember opening that book as a 12 year old and seeing that map and thinking “wow, I want to go there”. And Tolkien took me there, and I never left.

What do you feel was your breakthrough moment as a writer?

Interesting question. I think I’d have to say (and this is an unsponsored comment) it was when I first signed up to Online Writers Workshop and opened up my writing to a wide range of people of various backgrounds and levels of experience. It was terrifying when I did it, but it pushed me to a point where I don’t think I could have gone otherwise.Some of those people are still my crit-partners, though we’re not on OWW anymore, and several are now published authors.

What’s your family think about your writing obsession (is it ok to include that word?)?

It is an obsession. There is no other word to describe it! My wife has been very supportive and encouraging all the way along, though she’s not a fantasy fan by any means. My five year old twin sons are huge fans, to the extent that their whole reception class knows Daddy is an author and have seen the books and are probably completely bored with hearing about it all by now. I hope in a few years they’ll all buy the series.

Tell us about your current trilogy (…it’s a trilogy, isn’t it??). And about its genesis.

It was originally going to be 5 books, but my publisher told me a little while ago that I should seriously think about making it 3. I was reluctant, especially this late in the piece, but in the end I went with it, so now it’s a trilogy. The book actually started as a satirical take on Lord of the Rings, but over the following 7 or 8 years it slowly transformed into something that was less satirical and less Lord of the Rings. Eventually it morphed into its modern form, an Asian inspired fantasy. I think part of the reason I set it in an Asian world is that I adored the TV series Monkey when I was growing up, and I felt there was so much Chinese and Japanese mythology to draw on, rather than the usual European fare.

Monkey? That show rocked. Peter, you’ve had quite a few short stories published. What do you enjoy writing more, shorts or novels?

I think I enjoy both just as much. I’m probably more of a “natural” novel writer than short-story writer (perhaps because I have a tendency to waffle?) so writing short-stories is even more of a challenge for me. Because of that I’ve worked really hard to get better, and after many thousands of words of pure tosh I’ve started to see some publishing success. I think that’s probably one thing I do like more about short-stories — you don’t have to work at something for quite so long before you can send it out into the world.

How did you manage to write and be published, all while holding down a real job?

With great difficulty. Finding time to write is a huge challenge for me, and inevitably it happens late at night when I’m not in my best mindset. The frustrating thing for me is that during the day, while I’m toiling away as a software engineer, my writing brain is fully engaged, but I can’t do anything about it. Still, I’ve managed to write 2 and a half novels that way so I think in the end it all just works out. I’m hoping it will continue to work out for book 3. Somehow I feel even more pressed for time now than I did last year.

When is the 3rd book out?

Book 3 is due out May next year, provided I can meet the mid-November timeline. That’s not a given because I’m behind in where I should be with the drafts, but I’ll be giving it my best shot.

Do you see that work/write balance working in the next few years? Is there anything you’ll change?

Possibly as my children get a bit older there’ll be more evening time to write, but I suspect there may be even less. What I am hoping is that I can streamline the process a bit more, perhaps by not writing detailed manuscripts at early stages when the story flow hasn’t been settled, I’ve been burned wasting time like that a few times now.

Peter, it’s been a pleasure talking to you. Thanks for giving us insights into the world of the writer. We wish you godspeed with your next novel and all the best for the future of your family and career.

Peter’s books The Ghost of Ping-Ling and The Mapmakers Apprentice can be ordered at your local bookstore. His website is http://www.cacklingscribe.blogspot.com/.